Remember when I wrote this post about the French campaign, a day without immigrants? Well, along with fish and chips, chicken jalfrezi and our own Royal family, this is yet another bloody good idea to make it to Britain from foreign shores. 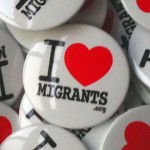 The ‘I love migrants’ campaign has been developed by the Joint Council for the Welfare of Immigrants to outline the facts around migration and help people show their support for people who have come here from elsewhere.  My particular favourite fact is this one:

The British Isles were completely empty until humans returned around 14,700 BCE. The land would by definition have been discovered by a migrant. St George was most likely born in what is now Turkey.

When your Queen, your Saint and your national dish all come from somewhere else, I feel it is time to start embracing your status as a citizen of the world, while junking outmoded nineteenth-century concepts of nationalism.  Now if someone could just explain that to the Daily Heil…
[tweetmeme only_single=false http://10mh.net%5D

6 responses to “I love Migrants”