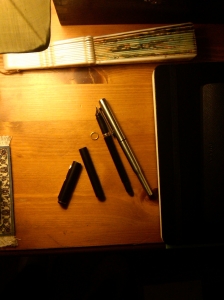 Disaster struck ten minutes hate this weekend when – not one! – but two of my fountain pens broke.  I can understand your thinking, this is the digital age, why would a blogger care about a pen being out of action?  Use another one, I can hear you shouting, get a biro, (wo)man the fuck up, Julia!

The truth of it is, that I can’t go back.  Forced to write with a fountain pen from a tender age because it was believed it would make my handwriting nicer, I tried to flaunt such bourgeois notions at university by using horrible and inevitably chewed-up old bics.  Tried, but I am afraid they don’t cut it with me.  I have employed the argument that I can write quicker with ink, as the nib glides across the paper more smoothly than a ball-point which cuts in, so my hand can keep up with my thoughts and I can get it down before whatever it was melts off into the ether.  Similarly, writing cheques (another soon-to-be-archaic experience) or letters, or birthday cards, or never-to-be completed ‘to do’ lists, all benefit incalculably from the use of what the Germans so charmingly call ein Füllfederhalter.

At school, I went through a – thankfully short, owing to its unmistakable air of pomposity – phase of using a fountain pen refillable from a bottle of ink.  Fingers would be permanently stained, pristine white shirts dappled with stray spots, a supply of blotting paper (always luminous pink – why?) could never be too far away.  With the old Parkers you could flick the ink, if you were so inclined, by hitting the right angle to unleash a flurry of black dots, marching across your friend’s textbook and earning you both a few deducted marks for your sham Pollock artistry.  I can’t image today’s schoolchildren being allowed access to something so fun and so messy, which is a shame, not least for standards in handwriting.

So while the broken utensils are off at the mender and I reluctantly make do with a scabby ball point from a long-forgotten conference, I leave you with this quote from Idler, Tom Hodgkinson:

Go backwards in all things.  Wear tailor-made suits, use a fountain pen, walk through the park instead of taking public transport, keep a copy of Byron with you, go to art galleries at lunchtime, enjoy an afternoon pint in the pub, sneak in a cinema visit during the working day.  You must transform yourself in your mind from put-upon wage slave to modern anthropologist.  Detach yourself.  And force yourself to leave work punctually.

Some of those are harder to achieve than others.  I would suggest that the fountain pen is a good place to start.

Hideously out-of-focus shot (in thumbnail anyway) of a corner of a desk, by Julia.  Also featuring alongside the two broken fountain pens: my Moleskine, glasses, jewellery box and a Mallorcan fan dating from the Seventies. The usual writerly detritus…