How to help Japan 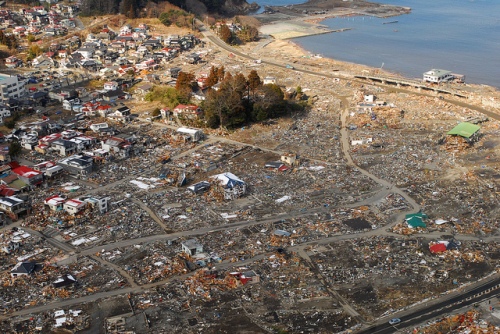 Following the survivors’ stories and video footage, here is the Tohoku earthquake rendered as numbers and facts (with thanks to Michael Soron for his illuminating post):

The government estimates the material damage from the quake and tsunami alone could top $300 billion, making it by far the world’s costliest natural disaster

This means that this year Japan is likely to move from being the world’s biggest donor to the biggest recipient of aid.  Other statistics are notable for the individual stories and hardships that undoubtably lie behind them:

With much of the attention naturally being drawn towards the ongoing situation at Fukushima nuclear power plant, there is a gap emerging.  People living in evacuation centres need practical assistance now, with everything from food to clothing to transport.

Some innovative and inspiring individuals are helping to make a difference, such as the Dutch architect developing plans for a community centre in Iwate and the Free Tohoku blog, a collective of concerned people seeking to match immediate needs with donations.  One of the Free Tohoku initiatives has been to urge the city of Abiko in Chiba to send abandoned commuter bicycles to those who have lost their means of transport – a vital link to resources and employment.

Faced with the numbers and such unimaginable destruction, it is easy to feel powerless and small, that there is nothing one person can do to assist.  I believe that the opposite is true.  There are links to disaster relief organisations here.  Quakebook is available to buy here.  Bikes for Japan is here.  You and I may not be able to rebuild lost buildings or deliver aid to the stricken areas, but we can support those who can.  Together we can help the people of those areas get back on their feet.