We got talking at the Free Tohoku and It’s Not Just Mud Christmas party, despite not sharing much language, our ‘conversation’ drifting over the head of her small boy, who wriggled in her arms in that way that children do the world over when they decide that Mum has been talking long enough.  He was too shy to look my way at first, burying his face in her shoulder as we tried to get him to wave ‘hello’ or ‘konnichiwa’.  We chuckled over his antics until eventually he looked to see what was happening and we were rewarded with a big smile.

I asked his age and she said he was only four months old, so she would have been pregnant during March.  I thought back to that time, things like how difficult it was to sleep, the huge number of aftershocks, constantly watching the news coming from Fukushima and how the strain affected everyone.  How much harder it must have been in the North, where shocks were stronger and more frequent, family members disappeared or dead and the buildings more damaged.  Then having to face that while pregnant.  I couldn’t believe how strong she was.

Surrounded by the children enjoying the party, running around, chasing each other, jumping like crazy on the bouncy castle, it was great to be able to give them this chance to be kids again.  Imagining the loss and fear that they must have experienced, coupled with seeing their parents – the ones to run to when something scary happens – also looking afraid.  Having to be strong for each other in the face of so much uncertainty and loss must take its toll and I hope the party was able to provide a brief comfort.

After the event finished we had another visit to make.  Our bus headed to Okawa Elementary School, the scene of incredibly tragic events on 11 March.  As the Asahi Shimbun reported:

Of the 108 students at the elementary school, 64 were found dead and 10 were still missing as of April 9. That means that about 70 percent of the students became victims of the tsunami.

(Elementary school in Japan runs from the age of six until 12, when students graduate to junior high.)

By a cruel twist of fate, because of the school’s location at the edge of the city and disrupted communications, rumours had spread that everyone at Okawa school had been saved.  Parents spent an anxious night wondering if their children were scared or cold, before learning that few had survived.  There were reports of a line of children and teachers walking towards the nearby river, because the hill at the back of the school was too steep to climb, when they were engulfed by the tsunami.  The waves had risen above the roof of the school, a two-storey building.

As we arrived there on Christmas Eve, I saw that the school buildings were in a terrible state.  No glass remained and it was possible to look right through the ruins.  The area around the school has been cleared and lorries hurtled past, one after the other, carrying debris from further along the road.  The paper decorations on a Christmas tree standing in the school’s entrance hall fluttered in the biting cold wind and the evening began to draw in.

Waiting to meet members of our group were some of the bereaved mothers of pupils at the Okawa school.  It didn’t feel appropriate to take pictures, but this from Wikipedia shows what remains: 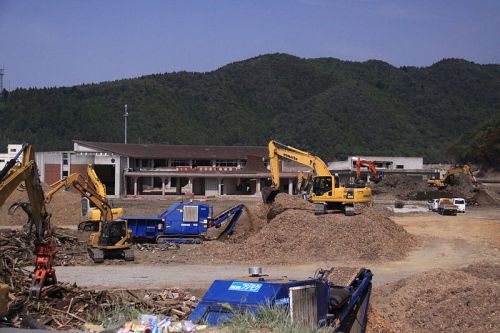 Close to the entrance to the school there is a shrine, with a statue of a mother and child, created by local sculptor Shozo Hamada: 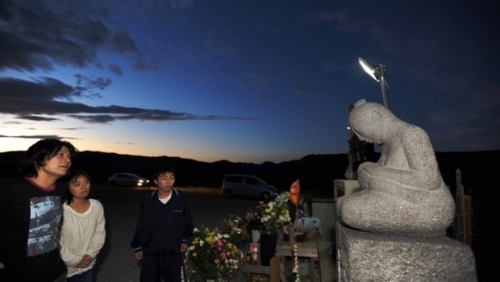 At the unveiling of the statue, he spoke of his hope that it would help the survivors achieve peace of mind.  I hope so too, however difficult that is while the bereaved parents still have questions about what happened immediately after the earthquake on 11 March and wonder if events could have been turned out differently.

If the tsunami came one hour later, if I went to pick them up by car, if the earthquake had hit on Sunday… they wouldn’t have lost their lives, I cannot regret enough.

Survivors across Tohoku will be dealing with such mental anguish for many years to come, long after the rebuilding draws to a close.  It is perhaps a cliché, but sharing Christmas with them, though so far away from my own loved ones, showed me how much I have to be thankful for.  No one who was in Japan during March 2011 will ever forget these events, now it is for us to make sure that those directly affected aren’t forgotten as they attempt to rebuild their cities, homes and lives.

If you are in Japan, there are many excellent organisations to get involved with, from It’s Not Just Mud to Free Tohoku and Smile Kids Japan.  If you are in another country – why not visit and volunteer? – or make a donation!