Once by Morris Gleitzman

Books have helped me to make sense and connect with the world. I venture to a library or independent book store when I need to be inspired or find solace. I am particularly taken with Emily Dickinson’s quote,

There is no frigate like a book to take us lands away.

So on Monday 27th January, World Holocaust Memorial Day, I am choosing to ‘remember to remember’ by going to the one thing that has been a consistent companion in my life, a simple book. This particular date marks the day to remember the millions of people killed in the holocaust and in subsequent genocides in Cambodia, Rwanda, Bosnia and all the other places where such atrocities and persecution have taken place.

27th January marks the liberation of Auschwitz-Birkenau, the largest Nazi Death Camp. World Holocaust Memorial Day is to honour the survivors of regimes of hatred and challenge ourselves to use the lessons of their experience to inform our lives today.

Books contain the souls of people, experiences and life etched into the paper. Certain fascist regimes have tried what I call the ‘etch-a-sketch’ approach to history, where barbarity and horrific atrocities are quickly erased and then you start again, all you need do is pretend it never happened.

So what will I be reading?

The theme of World Holocaust Memorial Day 2014 is Journeys. One particular book I would recommend all to read is a journey to realisation, Morris Gleitzman’s tale, ONCE. The story is set in Poland 1942, as Felix is hiding from the Nazis in a Catholic orphanage. 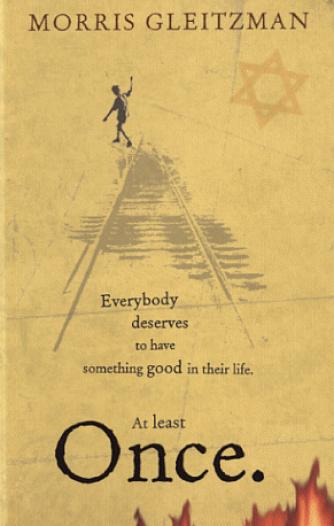 Once focuses on a boy who had a big imagination and a heart full of optimism. Once, his Polish-Jewish bookseller parents left him in an orphanage before seeing him wrenched away by the Nazis. Once, he saw the Nazis burning books.

The Nazis won’t be interested in me, I haven’t got any books.

Once you pick up this book you will not put it down, hope, compassion and optimism burn the engine of this narrative. Six million Jews, including one and a half million children, were executed during the reign of Nazi persecution.

Once is for all the children whose stories have never been told. The tale is written from a child’s perspective and from the onset his vulnerability is highlighted for he keeps giving thanks to the important figures in his world,

God, Jesus, the Virgin Mary, the Pope and Adolf Hitler.

The same way Mark Twain highlights the hypocrisies of humankind through the eyes of Huckleberry Finn, here Gleitzman uses his principal protagonist to emphasise the innocence of the child and to mark the brutal realities that the reader is only too aware of.

How did the tale get written?

One man, by the name of Janusz Korczak, planted the seed in Gleitzman’s imagination. A Polish-Jewish doctor and children’s author who devoted his life to looking after young people. During his lifetime he helped to manage an orphanage for 100 Jewish children. In 1942, Janusz was offered his freedom but chose to die with the orphans rather than abandon them. Gleitzman was inspired by many real life tales, letters and diary entries chronicling the memories of the young people at the time of the Holocaust, including:

The Hidden Children by Jane Marks,

The Boys by Martin Gilbert.

Through the years artists have attempted to describe the indescribable. I particularly admire the Rachel Whiteread memorial in Vienna, a stark, inverted library set in concrete, a lifeless form with no sympathetic lines. A nameless library of untold stories.

To forget a holocaust is to kill twice.

One response to “Once by Morris Gleitzman”