I like to read and write in bed. A comfortable mattress can at times be equally as productive as a sturdy desk. A pad perched up on my knees, drafting, crafting. My mantra has always been: graft equals craft.

One of my idols, Frida Kahlo, used her bedroom – sometimes out of necessity. There she would sketch and paint images that came out of her dreamscape. A cocktail of her fear and inner thoughts. Breton famously  described the work of Frida as

a ribbon around a bomb.

She was used to suffering from early age when she contracted polio and then at 18 was injured in a horrific bus accident, where she sustained injuries that affected her throughout her lifetime. Her personal life was turbulent and her relationship with soul mate Diego Riveria was a tempestuous one. The creative couple was known as ‘the elephant and the dove’, a Beauty and the Beast-like pairing.

Her entire catalogue of work is a testament to my personal belief that art has a transformative element; turning negativity into something positive. Be it a writing pad, a canvas, a block of wood or clay, an artist’s role is to take experience, push it, question it and put it out there. Her self-portraiture is painted with a pallet of wit, raw honesty, brutality, pain, cruelty, passion and empowerment. Or as she simply put it,

I paint my reality.

This inspiring lady had a resilience that pumped through her blood.

Five months after her accident she posed in a family photograph, wearing a grey suit, a practical element to disguise her injuries. A controversial, provocative dandy, taking centre stage in the composition captured by her photographer father, Guillerno. Almost like the son he never had.

The artist used her own body as a canvas, painting the massive plaster cast that bound her torso during her recovery from the accident. She later took on the Mexican dress of long skirts, heavy jewellery, fringed shawls and a crown. 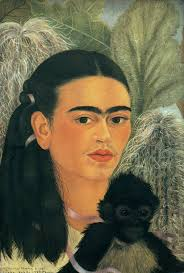 FULANG, CHANG and I (1937), illustrates Kahlo at the height of her beauty, an image from the sensual world. 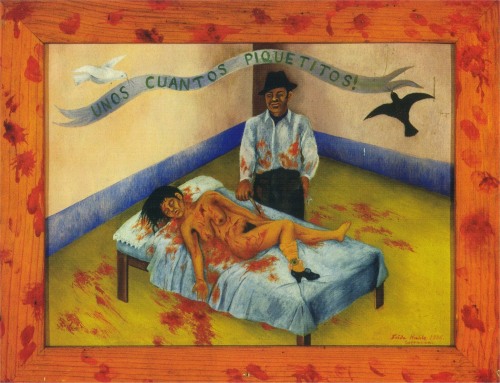 A FEW LITTLE PRICKS (1935), inspired by a morbid newspaper report, she used this story to distance herself from the real life trauma of the recent betrayal of Diego sleeping with her sister Cristina. The victim in the composition has her sister’s features and the man with the knife resembles Diego, while Frida herself imagined that she herself had commits the murder. 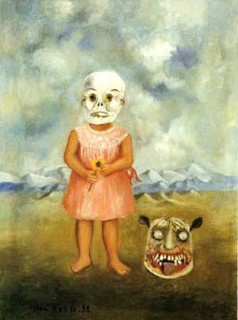 LITTLE GIRL WITH A DEATH MASK (1938), inspired by the native style of popular Mexican art.  A person clad in a traditional white death mask, holds a sunflower (tagete) traditionally used during the day of the dead, celebrated on the second of November. The flower is meant to light the path for the souls of the dead as they make their way back to their ancestors. On the floor there is a jaguar mask in papier mache, another ritual accompaniment at this annual festival. 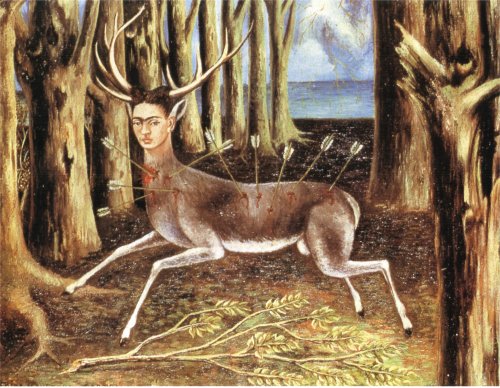 THE WOUNDED DEER (THE LITTLE DEER) 1946, in this image Kahlo places her own visage on the animal and it conveys an expression of nobility, an air of dignity, in the crown of antlers. The deer has been pierced with nine arrows, a slow kill to symbolise the emotional pain of Diego’s repeated infidelity.

I paint self-portraits because I am the person I know best.

She did not solely use the medium of canvas painting; her diaries also contain sketches, reflections, watercolours, lyrics and poems. A candid, reflection on her personal creative process, her childhood, political sensibilities and obsession with Diego. The diary spans from 1944-54 and is a series of random memories and thoughts with no attention to chronology. The manuscript is a turbulent bag of emotions.

Why do I call him My

Diego? He never was

Nor ever will be mine

He belongs to himself

The legacy left behind by Frida Kahlo is a collection of paradox, she is both victim and heroine, suffering and successful, but above all human. Essentially painting her own life. 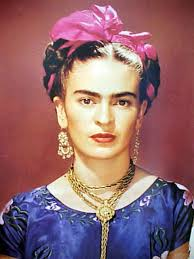