Whistler at The Bluecoat

The Bluecoat’s offering for this year’s Biennial is an exhibition celebrating one of the most influential figures in the arts of the 19th century, James McNeill Whistler (1834-1903). A crammed collection of paintings, sketches, letters and notes. It’s like entering the head space of this outspoken, argumentative and maverick creator.

Whistler dressed in his black patent shoes and with a white plume of hair coiffured against black waves, cultivated a charismatic public persona who challenged the art community and elicited the mocking attention of the popular press. He had famous spats with Oscar Wilde and his one-time friend and benefactor F.R. Leyland.

His work was hung well-spaced out – on the line – marking a radical change from conventional salon style, which saw pictures cover the walls. He described his works as symphonies, arrangements, harmonies, nocturnes. The deathly marks of industrialisation are captured in his watercolour paintings Nocturne in Grey and Gold, Piccadilly (1881-83). The thick fog – or pea soupers, as they were known – seeps off the canvas. 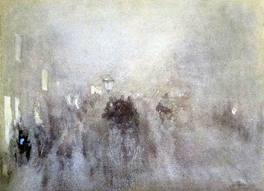 His Venice etchings were presented in 1883 at an exhibition at the Society of British Artists, titled Arrangement in White and Yellow. Whistler wanted the event to be more than just an exhibition; he wanted to give his guests an experience. The walls were decorated in different shades of white with the skirting boards, yellow. The attendants wore yellow clothes to match. A final detail for favoured guests, he designed yellow butterflies to wear at the launch. The press cruelly labelled the spectacle, The Poached Egg. One critic commented on the etchings The Piazetta, The Palaces and The Two Doorways,

He has been content to show us what his eyes can see, and not what his hand can do.

Etchings on paper, fabulous depictions of Speke Hall in Number 1 (1870) and the billiard room indicate his connection to Liverpool. A notable piece in this exhibition is his caricature of F.R. Leyland, The Gold Scab: Eruption in Filthy Lucre (The Creditor) (1879), crafted at the time of his bankruptcy.

It is one of three paintings intended as a prank for his creditors to discover when they arrived to make an inventory of his possessions. It depicts Leyland as a rich peacock wearing a favourite frilled shirt sitting on a piano stool that is the White House (the artist’s Chelsea home) which was on the verge of repossession.

It is interesting to see the evolution of his Butterfly trademark. Proof of Six Butterflies is printed on proof paper (1890), loosely based on the initials JW, a butterfly signature often had a sting in its tail, the point directed at his enemies.

Whistler’s involvement with the Aesthetic movement is illustrated throughout this expansive collection. The movement consisted of Rossetti, William Morris and Wilde, a bohemian group of artists, writers and designers who favoured beauty and form over sociopolitical content: art for art’s sake.

The press (like that of today with celebrity culture) were fascinated by the group’s ostentatious style, dress and lavish lifestyles. This exhibition is one of the highlights of the Biennial and I feel that the setting (the historical Bluecoat) really adds to the whole essence of the experience. Whistler would indeed approve!

Recently, the Merseyside Civic Society celebrated the fact that the Heaps Rice Mill, in the Baltic Triangle, has been categorised as a Grade II listed building by the government following an inspection by English Heritage.
Not to be developed into yet another series of apartment blocks to remain empty, owned by an off shore property conglomerate in the Seychelles! We need to see the old buildings re-claimed and used for the people of Liverpool by the people of Liverpool. Projects like Opera for Chinatown by THE SOUND AGENTS and the recent use of the Old Blind School as part of this year’s Biennial are exemplary. Let’s pimp up the old architecture lying barren in this city with similar innovative offerings!

One response to “Whistler at The Bluecoat”