That was the first thing I remember about the John Moores Painting Prize. It was also the first time I saw Hockney’s portrait of a man emerging from a poolside, Peter Getting Out of Nick’s Pool, in the collection of previous winners. The rush of the blue flooded over my retina imprinting its memory on the canvas of my cranium. In my years of teenage wildlife, I’ve been visiting ever since. 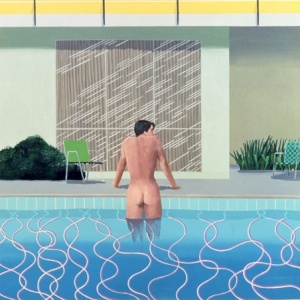 Recently, an early Sunday morning in October 2014. Town was littered from the previous night’s disorder. A carton of mushy peas and a blonde discarded fascinator lay on the pebbled courtyard, debris from a battle in a nightclub. I thought perhaps Saatchi may purchase it for his next happening. 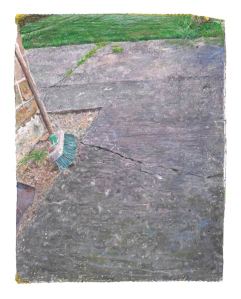 I love the Walker Gallery; it is a source of inspiration, William Roscoe’s collection of Medieval Paintings, Stubbs classics and one of my ultimate Pre-Raphaelite favourites, The Metamorphosis of Narcissus. This year’s selection for the John Moores Painting Prize is an impressive batch of real painters. From the meticulously crafted 88 Calories by Conor Nial Rogers – painted on a minute crisp packet – to the texture rich, 18.45 April 7th, 2011 by David Dawson that up close looks like cake, paint is layered on as thick as a Scouse girl’s make up on a Saturday night. 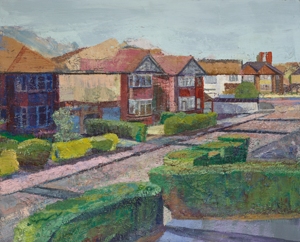 My favourite piece is The King of Infinite Space/Don’t Let Life Pass You by David O’Malley, I think as I have a passion for the work of David Bowie. I see the displaced astronaut as a Major Tom-like figure. Instead of swimming in a tin can, the space cadet is floating in a most peculiar way in front of garish bad taste wallpaper. 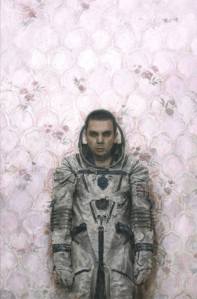 I also love the massive Vinculum by Juliette Losq, which looks like it has come straight out of a Victorian penny dreadful. This piece covers the span of an entire wall and the detail is stunning. I have often believed that an artist needs to refocus the viewer into seeing the beauty in the everyday and that is apparent in this collection of diverse work.

There are a few pieces in here though that I feel suffer from the Emperor’s New Clothes Syndrome, but this is an impressive gathering of creative souls. I’d also advocate for seeing the exhibition with a kid. For a child has that Huckleberry Finn quality of telling it how it is. I took my niece, the ginger minx, for I have always valued her perspective, sometimes over the experts. I took her to see a Sarah Lucas exhibition several years ago at the Tate and one piece was just a massive photograph of a spotty male bottom. Two art groupies stood in front of the piece pontificating with syntax laden with terminology and pomp. Not really sure what they themselves were saying.  The kid was three at the time and she looked up at the piece, looked at me, gazed at the two adults drooling over the masterpiece in front of them, she looked back at me and then pointed at the art and growled, ‘EEEEE!’ In one word she summed up the fact that this naked image was in fact gross.

The exhibition encourages people to vote on their favourite and submit it in a ballot box. She chose Homeland by Covadonga Valdes and on the card when asked why, wrote simply, ‘It is unusual.’

The exhibition is on till the end of November, I have made several visits back in my lunch hour, it beats sitting at a desk, with a stale sandwich and internet glaze. Go and vote for your personal favourite and if you can, take your own little mini art critic. Remember those artists need you!

Details of the winners can be found here. The ‘Visitors’ Choice’ award will be presented towards the end of the exhibition. Visitors can vote for their favourite painting when they visit the gallery. The winner will receive a prize of £2014.