It’s all about the Monet

Paris is essentially one massive open air Art Gallery. A canvas that is always changing, through the seasons and the lively interaction between its residents and its dramatic buildings. There are a copious amount of galleries, studio space and lofts to stumble upon. Artists showcase work to which expectant thousands look for their supply of creative pabulum. There are also established galleries that are world renowned.

The Musee de l’Orangerie is one such place. A vestibule designed by Monet to craft a space between the hustle and bustle of the city and his works.

The pieces that capture his signature water lilies were essentially his gift to France. On stepping through the doors, you receive an open invitation into a haven of peace.

Nerves strained by work would relax in its presence, following the restful example of its stagnant waters, and for he who would live in it, this room would offer a refuge for peaceful meditation in the midst of a flowering aquarium.

Nature provided the source of inspiration, it was the painter’s own ‘water garden’ in Giverny, Normandy. He yearned to try to recreate on bold canvascapes the changing qualities of natural light in his garden. He continued to busy himself on the pieces until his death in 1926.

Drifting through the two rooms, scan your retina over the eight panels and it evokes the passing from sunrise to sunset. It is as if the very elements, water, air, sky and earth are merging. The composition drowns the viewer.

The seats in the middle of the viewing space are a necessity as you need to perch for a moment to take in all of the beauty detailed. Shades of purple, iridescent blue, like you have been dropped in the middle of a lagoon. It is quite breath-taking! 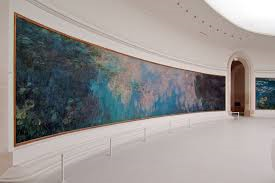 So when next in Paris, I recommend visiting Monet’s achievement.

The illusion of an endless whole of water without horizon and without shore,

as he so aptly put it. Let the waters wash over you. Drown your eyes in the stillness, a brief respite from the speedy world we live in.