All Together Now – the Football Quarter

If you were following the Twitter #banter during Saturday’s FA Cup semi-final between fans of local rivals Everton and Liverpool, you might be forgiven for thinking it was all a little charged:

In reality, we manage – despite our allegiances – to be most of the time the best of pals. In Liverpool, the line between Red and Blue is often drawn between siblings, cousins, colleagues, mates or even spouses. It usually remains fairly well-mannered, although family gatherings after a result has not gone your way tend to be approached with the same sinking in the gut as a trip to the dentist for a root canal.

So derby day is always fraught with excitement and trepidation. I have been lucky enough to attend a couple of derbies at Anfield and it is exactly as you would imagine: an electric atmosphere. The result is almost secondary to winding up the other fans with an array of chants about the misdeeds and missteps of their players. There are usually a few sendings-off as the teams get caught up in the occasion, which everyone pretends to disapprove of but is secretly happy about, for proving that the players know what is at stake. I remember once yelling at the Everton fans for 90 minutes before calling into my grandparents’ house on the way home to find the Blue half of the family already installed, drinking tea and laughing over the insults they had been flinging back at us. Good times!

So perhaps with all these family ties it shouldn’t cause too much surprise that fan organisations Keeping Everton in Our City (KEIOC) and Spirit of Shankly (SoS) are working together to promote plans for turning the area of North Liverpool where both clubs are based into a ‘Football Quarter’. This aims to create an attractive destination for the thousands of visitors who attend matches at both clubs each season, as well as providing a greater quality of life for the residents of Anfield and Walton.

The scheme was launched just after Christmas, with a prospectus put together by Capita Symonds, backed by local MPs and available to read here. It looks like an attractive option for what has remained a chronically neglected area of the city in all the redevelopment that has taken place in recent years. Despite the millions spent on the river-front, new hotels and shopping centres in town, other parts of the city have missed out. A grand regeneration project which stalled has seen families moved on and streets of houses boarded up awaiting demolition, with no progress being made towards their replacement. 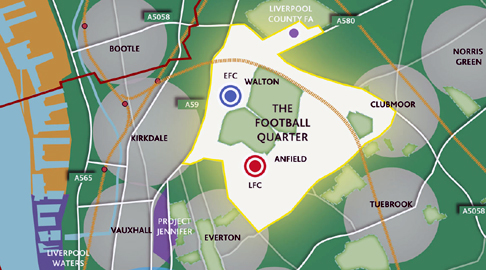 Liverpool’s recent history is so full of plans which promised the earth and delivered little more than destroyed communities, that people there are right to be suspicious of the idealised daydreams contained in the drawings of planners. For the Football Quarter to avoid the pitfalls of these earlier grand designs, it must bring together the competing interests of local and central government, businesses and investors, residents and visitors to the city, not to mention the two football clubs.

It is truly ambitious in scope. And if done right, it represents the best chance in a long while to build a future for a neighbourhood which is currently both world-famous and close to derelict. For that to happen, everyone needs to know about it. So whether you live in L4 or make the pilgrimage there to watch your team play, read the prospectus and pass it on. Please show your support and sign the associated e-petition. Let’s make sure that this proposal involves as many people as possible who have reason to love this corner of the city, whatever the colour of their scarf.