Who that has not suffered it understands the pain of exile?

To be quite honest, having travelled back on average once a year for the slightly more than four years so far spent outside the UK, to call it ‘exile’ is to overstate the case slightly. In these days of free internet calls and the journey not taking three weeks by boat, it is a bit daft to consider oneself banished far from all the good things of home. 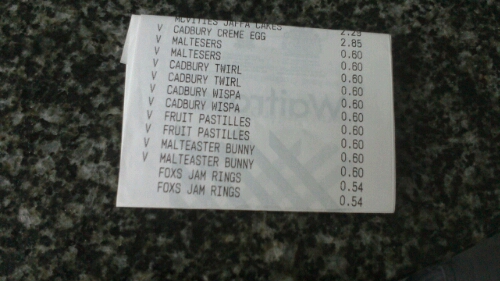 Can’t be trusted in the sweet aisle, clearly…

That said, a relative bought a print of the Albert Dock and Three Graces in Liverpool for my wall in Japan and there are some mornings it is difficult to look at, the ache from not being able to walk into the frame is too much. Missing the city as if it were an old friend is a strange feeling – the flesh and blood should have a bigger call on the emotions than bricks and mortar – but as I have been exploring this festive season, there is just something special about the Pool of Life.

Missing it too much, however, can feel like a betrayal of the other city I call home. Life in Tokyo is great, if not without its minor annoyances, just as would be the case with anywhere. The trick that homesickness plays is to mask all the deficiencies of home, while throwing a shadow over all the benefits of away. Then you are in danger of becoming one of those awful bores, lacking any sense of perspective, that have been plaguing expat life since at least the Thirties:

He had forgotten that most people can be at ease in a foreign country only when they are disparaging the inhabitants.

The flip side of that is that, since returning, I find myself looking at my fellow shoppers, diners and train passengers wondering which of them ‘looks a bit UKIP’. A recommendation from brazzo70 in the comments on this post to check out Charlie Brooker’s Screenwipe 2014 underlined all the ways in which the home country is leaving me behind (who in the hell commissioned Tumble? Danny Dyer in Eastenders? Nigel Farange appearing on anything? WHY WASN’T I CONSULTED ABOUT ANY OF THIS?)

In an attempt to stave off the next bout of pining, measures have been implemented to bridge the gap. A Christmas present to myself was an annual subscription to Private Eye, so from later in the month you can expect to hear howls of outrage from my direction about a week after the original story first breaks. I also managed to register to vote as an overseas voter: this is open to all who left within the last 15 years and were registered before they left. Watch out, David Cameron!

Monday 21 January was designated by someone as Orwell Day, in commemoration of the anniversary of the writer’s death. Penguin Books offered a generous discount off the ‘Classic’ editions of his works and various media outlets took the opportunity to highlight his journalism. Lib Com had one of the best examples, this essay on the myth of freedom of the press, as evidenced by the difficulties Orwell experienced in finding a publisher for Animal Farm. The New Statesman went one further and declared Orwell Week, prompting the Spectator to point out that the writer and the NS editors had not always seen eye-to-eye, quoting this from an Orwell Tribune column:

Do remember that dishonesty and cowardice always have to be paid for. Don’t imagine that for years on end you can make yourself the boot-licking propagandist of the Soviet regime, or any other regime, and then suddenly turn to mental decency. Once a whore, always a whore.

As someone who has always preferred to mark Orwell’s birthday, I suggest ignoring all of this hoopla, especially as it seems a reasonable bet that he would have hated the idea of Orwell Day. Instead, pass some time with Emma Larkin’s Finding George Orwell in Burma, a mixture of travel, historical and political writing, which contains much to surprise and inform even the dedicated student of Orwell.

Despite having spent over two years living in Asia, before reading this book I had to confess to ignorance of all but the broadest facts of Burma’s recent history. How the country journeyed from the colonial past depicted in Orwell’s Burmese Days to control by its straight-out-of-Nineteen Eighty-Four military junta via the betrayed revolution of Animal Farm is detailed here, not only with factual observations but also through the lives of Burmese people. On her travels through the cities and countryside – ostensibly researching locations that Orwell and his mother’s family lived in and visited – Larkin encounters former prisoners, booksellers, journalists, teachers, the remnants of the Anglo-Burmese population and many others determined to share their stories in spite of the dangers. On expressing her surprise at their vitality, one friend retorts:

What did you expect? That we would all be sitting around on the pavements crying?

That would certainly be one likely response to coping with Burmese levels of doublethink, elements of normality everywhere from the tea shops – ‘an integral part of life’ – to the love of books and reading for pleasure – mention that ‘books are sold… at the night-time book bazaar in Mandalay’ and my ears prick up. Yet those same tea shops are ‘treated by the regime as potential breeding grounds for anti-government activities’ and thus the happy hunting grounds of informers, while one writer tells her that they are:

free to write whatever we want. We’re just not free to have it published.

Visits to dilapidated colonial buildings, old Christian cemeteries and key locations in Orwell’s history carry the story along, including one to the Police Training School – still used to house policemen today – where the young Eric Blair was trained in the methods of surveillance and population control that the military continued so enthusiastically after the British left. As a foreign female tourist, Larkin attracts attention from Burma’s diligent security operatives wherever she goes. In this fascinating interview, she talks about the methods she uses to avoid attracting attention and to protect her sources. (She also selects her five favourite books about Burma if, like me, you are keen on further discovery.)

Larkin seemingly has her own version of doublethink, captivated by Burma’s beauty while despairing that the army’s control can ever be relaxed. It must be like visiting a good friend serving a life sentence in prison, as one interviewee describes the population as the 50 million hostages of the regime. Aung San Suu Kyi – released from house arrest since the publication of the book – and her National League for Democracy perhaps offer some hope. Yet, as she travels, Emma Larkin muses on Winston Smith’s words from Nineteen Eighty-Four,

Where does the past exist?

and their relevancy to Burma, where all mention of the huge uprisings which took place in 1988 and their suppression have been erased from official histories. Restoring the country and its people to ‘normality’ will be no easy task.

uses Burma to explain Orwell, and Orwell to explain the miseries of present-day Myanmar.

It is an excellent and engrossing read, informative yet not in a dry way, featuring characters who, although they must be heavily disguised, remain vital and lively companions. I found it to be an illuminating tour through a country which shaped Orwell, informing his most celebrated books and turning him from disaffected colonial policeman into a writer unafraid to denounce totalitarianism, wherever he found it.