The Clegg and Compo show 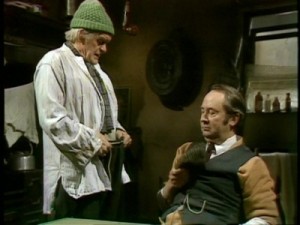 Here we all are then, the Dave ‘n’ Nick show opens with the release of the initial and snappily titled ‘Conservative-Liberal Democrat coalition negotiations agreements’ on how we are to be governed.  You can read the whole thing here.

The agreement does demand close inspection, because there are at least a couple of hopeful messages for the future directed at those who may be feeling concerned.  Here is one such commitment that initially caught my attention, something which you might have hoped would never need to be carved into tablets of stone in a civilised country, had recent events not so manifestly demonstrated otherwise:

We will end the detention of children for immigration purposes

Almost gives you hope, doesn’t it.  Add to that:

and you might find yourself questioning if the Conservatives had actually won on any of the negotiating points.  Don’t run away with that thought, though, because of course they did:

As playwright (and exotic dancer) Dan Rebellato commented on Twitter: 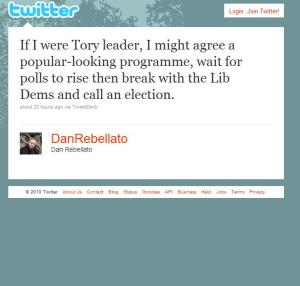 so I agree, it is vital for us as voters to retain some cynicism about the whole process.  On the other hand, it is equally important for the Conservatives that they don’t cause undue alarm in this initial period, calming the nerves of people with a visceral hatred of all things Tory, reaching out to wavering Lib Dems and making us all believe that they have our best interests at heart.  There are even some reports of a much deeper change in outlook, if Tory blogger Tim Montgomerie is to be believed:

‘They don’t believe us when we say we’re not two-headed, monstrous Thatcherites so we’ll just have to prove it in office,’ was the conclusion of one leading Cameroon.

I find myself with the words of Mandy Rice-Davies echoing in my head: ‘well he would say that, wouldn’t he?’  When most of the Cabinet count their small change in the millions rather than in silver and copper, you have to question how far we can realistically expect them to understand the concerns of us plebs.  Are they likely to protect the hard-won services and policies that may seem like an unnecessary extravagance at this time of extraordinary economic turmoil, but which we recognise as essential in the battle to keep body and soul together?  I wonder.

Similarly, it is difficult to feel much confidence in the sudden raging appetite for political reform amongst those who typically consider themselves to be the natural party of government.  Having been kept away from the top jobs for over a decade, they won’t be keen to vacate them so readily.  The Alternative Vote system proposed in the agreement is a long way from the demanded Proportional Representation,  as noted by John Q Publican:

It’s about safe seats. AV is the only one of the alternative systems which preserves them intact. Safe seats are graphably the reason for the expenses scandal. Safe seats allow parachuting of candidates, placing too much power in the hands of central committees over local candidates and parties. Safe seats are wholly counter-democratic. And the LibDems have almost none of them, but the other parties have quite a few each

It does seem that if we are not very careful, what we could end up witnessing is a rapid return to what Rosemary Bechler calls ‘business-as-usual politics’, instead of what benefits us as voters:

We want open discussion and robust decision-making that takes in a range of options we can keep our eyes and ears on.  We want people who answer to our criticisms face to face (as opposed to Jeremy Paxman’s). We want people who ask us what we think much more often.  And we want a democratic, fair, adult, proportional electoral system

So how do we go about getting that?  I believe we must keep up the pressure by demanding a fairer voting system until we get it – the Take Back Parliament campaign is one way of doing this.  Another is to join 38 degrees in deciding what comes next, following their successful actions during the election to counter adverse publicity about hung parliaments and challenge candidates to support electoral reform.

Whatever the outcome of this, the first UK hung parliament since 1974, it must not be more of the same.  Keep watching!