The shot pools clouds of confusion behind my eyes.  Somewhere overhead, the pub stereo plays songs by bands from the distant towns I grew up in.  It’s getting closer to the time to say goodbye.  As the alcohol mists over everything, I try to hold onto a stray thought, knowing otherwise it will be lost for good.

There are some people you want to stay friends with forever.

But the expat life is one of hellos and goodbyes, neatly slicing lines between those that are staying and those moving on.  Natural and man-made disasters abruptly speed up the churn until it seems like a constant round of farewells and greetings.  In the midst of this whirl, some you meet will matter more than the length of time spent together would usually warrant, not because you agree with them on everything, but because the manner of the disagreement feels too enjoyable to do without.  Each of you sure of the rightness of the point, yelling across the pub’s background noise, yet hardly able to remember a day later what it was or why it seemed so important.

Then there are the other creatives, so sure of their demands and so uncompromising in their execution that watching them work provides more than the obvious ‘inspiration’.  Instead, it feels closer to having a fire lit under you, being spurred to only produce what will deliver equivalent highs.  Learn as you go, but work without fear and without compromise.  Keep to your own standards and ignore the chatter.  Set out a list of rules then disregard them anyway.  Don’t pick fights with the Metropolitan Police Department.  That’s what I’ve picked up from only one month of knowing probably the mouthiest guy to take on Tokyo with a camera.  It’s been ace and I hope it’s not the last time our paths cross.  Safe travels to him and to the two cute dogs and watch yourself, England – he’ll be landing soon. 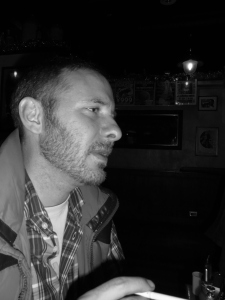